How to Encrypt Android Phone Protecting Your Information Security

Smartphones bring great convenience to our lives, it plays an extremely important role in our lives. While security and privacy are hot topics these days with data leaks and hacking on the rise. From the perspective of information security, it is necessary to set up phone encryption to protect data in that. This is especially important for devices that tend to be lost or stolen. Here are answers to some questions about encryption.

What is Phone Encryption?

Encryption is a way of encoding your private data on a device so that it can't be read by anyone unauthorized. Once you encrypt your Android phone, any new data becomes encrypted automatically.

If you're rooted your device, you'll need to temporarily unroot.

What data gets encrypted?

On an encrypted device, all personal data gets encrypted. This includes things like your email, texts, contacts, Cloud data, app data, photos, media, and downloads. Some non-personal data, like file sizes, aren't encrypted.

Why would I want my phone encrypted?

Things to consider before enabling encryption

Most newer Android phones ship with encryption already turned on by default. But if you’re using a device that doesn’t have encryption enabled out of the box, there are some things to consider before enabling it:

How to Set up an Encryption on Android Phone

Owing to the fact that encrypting the device can take an hour or longer, make sure your device’s battery must be at least 80% charged. Otherwise, Android won’t even start the process. You'd better plug it in throughout the entire process. Before you get started, ensure that a screen lock PIN or password has been set for your device.

In Settings, choose Security > Encrypt phone. Then hit the “Encrypt phone” again if you're ready to proceed. 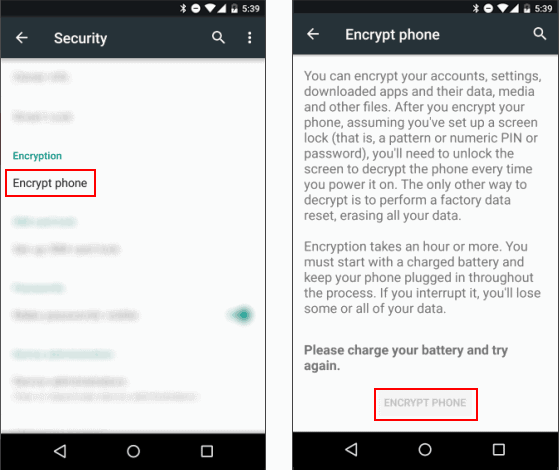 If you’re on Android 7.0 or higher, you’ll need to choose Storage > Storage encryption. On some phones, go to Storage > Lock screen and security > Other security settings to find the "Encrypt" option.

How to Decrypt an Encrypted Android Phone

If you have already encrypted your device, you would see the encryption button is disabled. And there's no way to change your mind other than factory resetting your phone.