This post describes 3 forms of non-cash payment methods such as Apple Pay, Alipay and WeChat Pay, which has become increasingly prevalent in recent years. If you are studying or living in China, you'll realize that they are totally comfortable making payments with their mobile phones via Alipay, WeChat wallet or Apply Pay.

What is the difference between the three most popular mobile payment methods? We will take a look at three of the biggest players in China's market.

WeChat supports most of smart phone with WeChat app.

Alipay is universal for all smart phone, tablets, and computer.

Apple Pay integrated into the iOS system, no require any apps. While the other two are third-party payment applications, need to register.

With Apple Pay can make checkout off-line, just put the iPhone or Watch near the contactless reader, with the finger hold the Home button to fingerprinting. No need to open any App or unlock the phone or screen.

How do you make an Apple Pay purchase with your new iPhone X?

1. Double-click the iOS device's Side button to bring up Apple's trademark payment system.

2. A glance at the True Depth camera to validate the transaction with Face ID.

3. Bring iPhone X near to the payment terminal and complete the purchase.

China is a "QR code country". Quick Pay is one of the QR code features of WeChat and Alipay, to enable merchants to scan your QR code on transactions. It is usually the larger merchants or retailers who scan your QR code with a scanner that linked to their POS system. It is the other way for smaller merchants - you scan their QR code instead.

1. Open the WeChat app under a fluent network.

Apple Pay has not involved with financial transactions, when checkout, money is directly from the cards which banded with. What’s more, Apple Pay account information will be encrypted, and without your fingerprint authentication, others can’t move your card property.

Apple Pay can be used to withdraw cash directly in the bank ATM machine with an NFC device.

For these two are the third-party apps, they can manage money in its account, and there are many functions can be used to serve life. Such as, open an account, store money, financial management, especially in internet finance.

Both WeChat wallet and Alipay are offering many City services. Users can book long-distance transportation, pay traffic fines, taxes and annual car registration through the service, on top of registering for marriage or childbirth. Additional, Red envelopes packed with cash gifted to friends and family is very popular with Chinese. 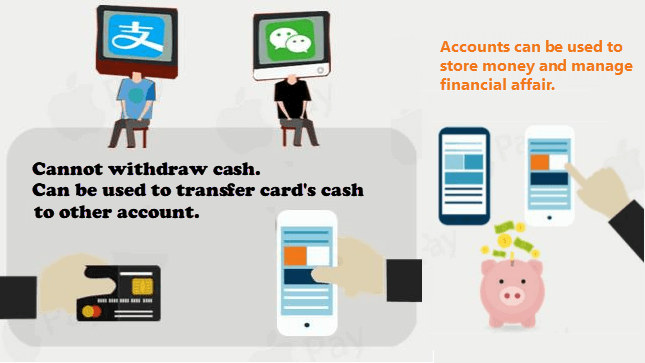 Apple Pay: Security is relatively high, pay step simple and fine, do not have to pay for networking, enjoying shorter payment time, can withdraw cash in ATM machines like bank cards. Apple Pay is leading in most countries, including the United States, United Kingdom, Australia, Canada, and 190 other countries.

Pros: Easy, convenient and fast to use. Can be synced with other Apple devices like Apple Watch and iPad.

Cons: Only works on Apple devices.

WeChat and Alipay: High popularity in China, Hong Kong, Taiwan, and 13 other countries.

Pros: They two are leading in Sports, Lottery, Networking, E-Books, and one other category. They can be used to buy financial products, grab a red envelope.